Tabs for Paternal Side

Tabs for Maternal Side

The No Issue issue

Have you ever come across an ancestor who has had what they termed "No issue"? This is when the person has had no children. This can be both with men and women. Have you ever thought of what the ancestor must have gone through when they were dying or getting elderly and never had any children? No one to keep their memories or values alive and to be passed along?

Most people, in my experiences, just say "they had no issue so we didn't look at them" and move on to another ancestor. Its like they didn't matter because they had no offspring to grow the family tree. I have to admit when I started researching my family history, I heard of it but hadn't run into it myself. Most people in my family have at least 1 child.

However, in the last 15 years, I've slowly, over the years, have come to know what these people must have felt through personal experience. My husband and I got married in 1997 and we wanted things to settle down and then we'd look into starting our family. We got married, I settled into living in

Australia, became a permanent resident here, and had we had stable jobs. We decided to go to the doctors to start on the journey of adding to our family of 2 (my husband and myself). The doctor was very upbeat and encouraging and we started on this road. Meanwhile, we bought and built our house thinking it was only a matter of time, and now we knew we would need help, to add to our family.

In 2003, we became pregnant and thought things would now start to fall into place there. However, we soon realized it was not to be as it wouldn't survive as it was in my tube so it was either the baby or myself. We did become pregnant a few other times but it never stayed for long. By this time over 7 years had gone by and we knew we were in trouble. We eventually found ourselves in IVF and doing IVF.

Meanwhile, our friends and family have had children and moved on and drifted from us. We found ourselves on the outside looking at the range people we had in our lives and found they didn't want to invite us out or over because they had children. We became the "too difficult and too different" couple. Then there were the conversations with people talking about their children and then them looking at you and saying either through looks or through words "you wouldn't know anything about this because you're not a parent". Eventually, we found ourselves not even trying to keep relationships going.

If this is how hard it in the 2000-2016, can you imagine how they must have felt back in the 1900's or before? What did they end up giving up or were excluded from because they didn't have a family like everyone else? My heart breaks for them each and every time I see someone refer to an ancestor which had No Issue.


I understand. We're in that basket with them.

Our story doesn't end here for us. In late 2015, things took a tragic turn. We learned I had a medical condition and would never - ever - be able to carry a child full term. True we could use surrogacy if we ever won the lottery, but its very expensive and a very long process if you got to do it. Yes, we're still looking into it, but since things happened in late 2015, I feel more kinship than ever before to those people who have been classified as having No Issue.

I hope we're not two of the forgotten ones in our history just because we might have No Issue under our names.

All I can ask is for you to remember those people with No Issue under their names matter too - they've lived, loved and were just the unlucky ones who couldn't have children. Please take a look at them and remember them - after all they are your family too. 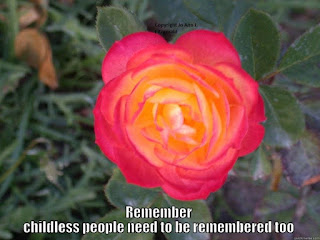